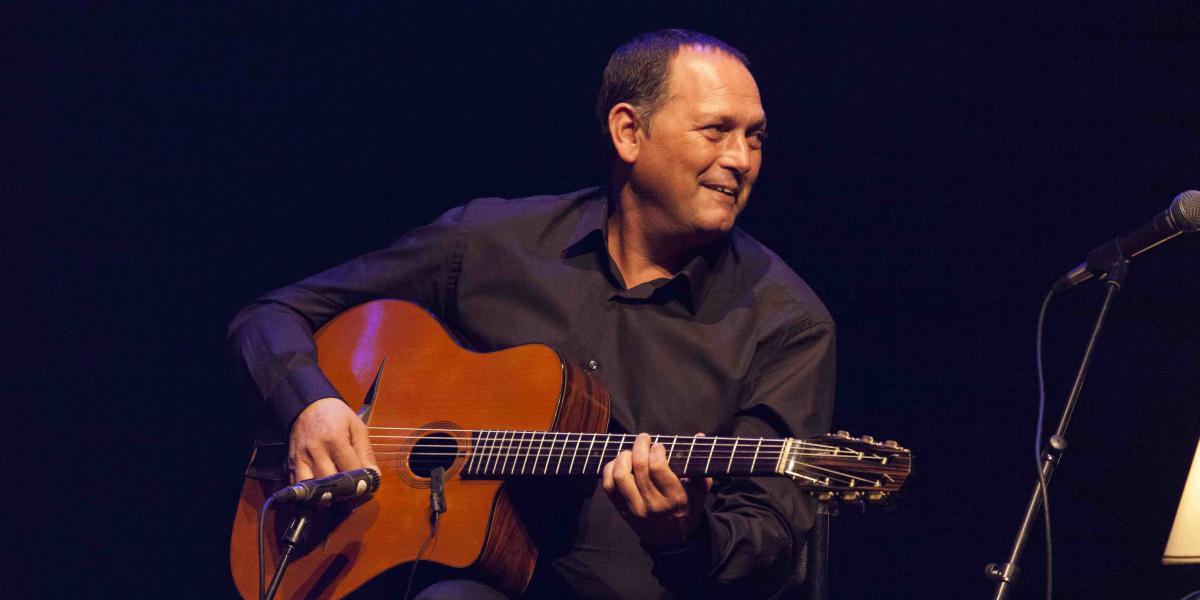 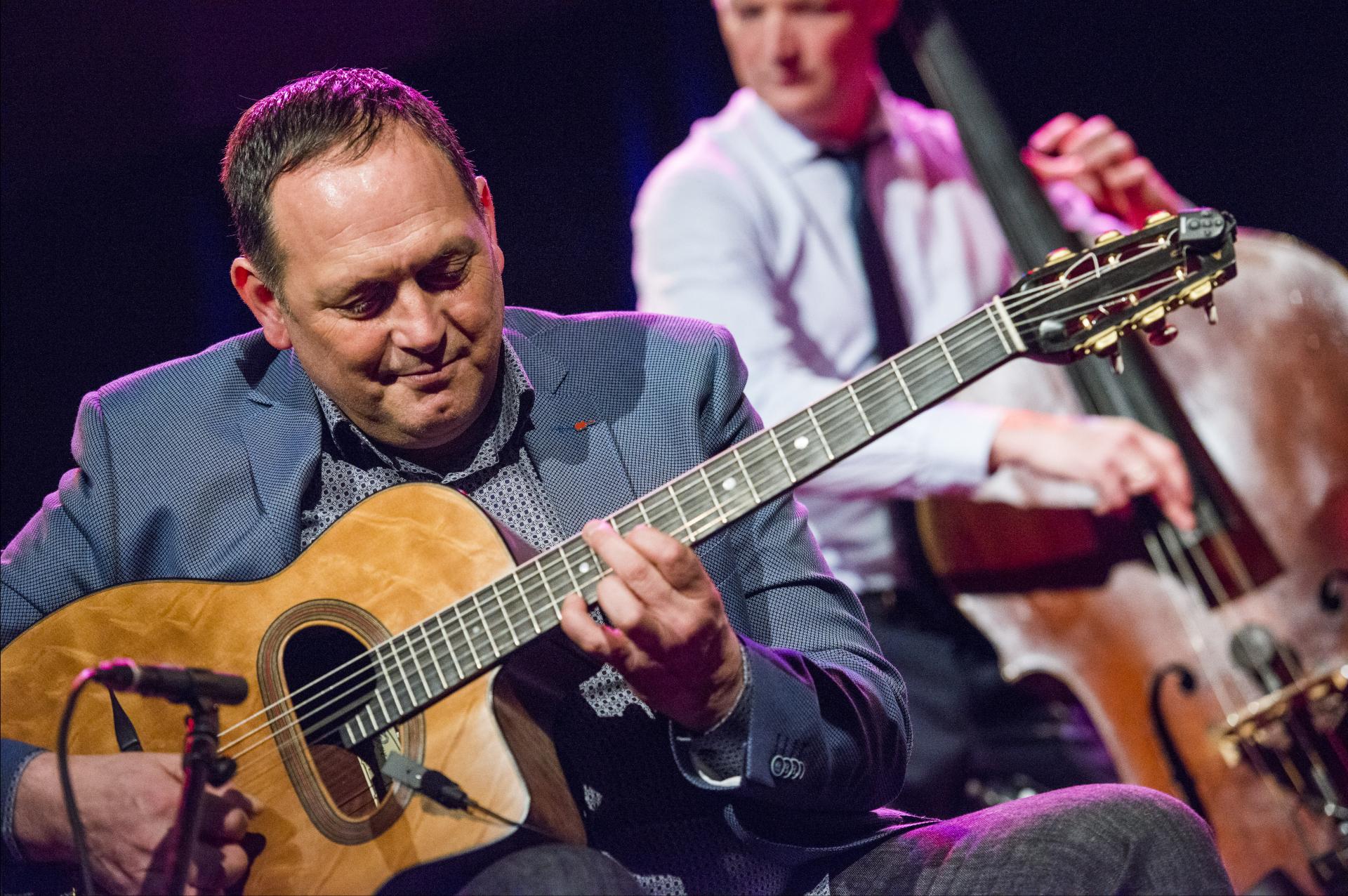 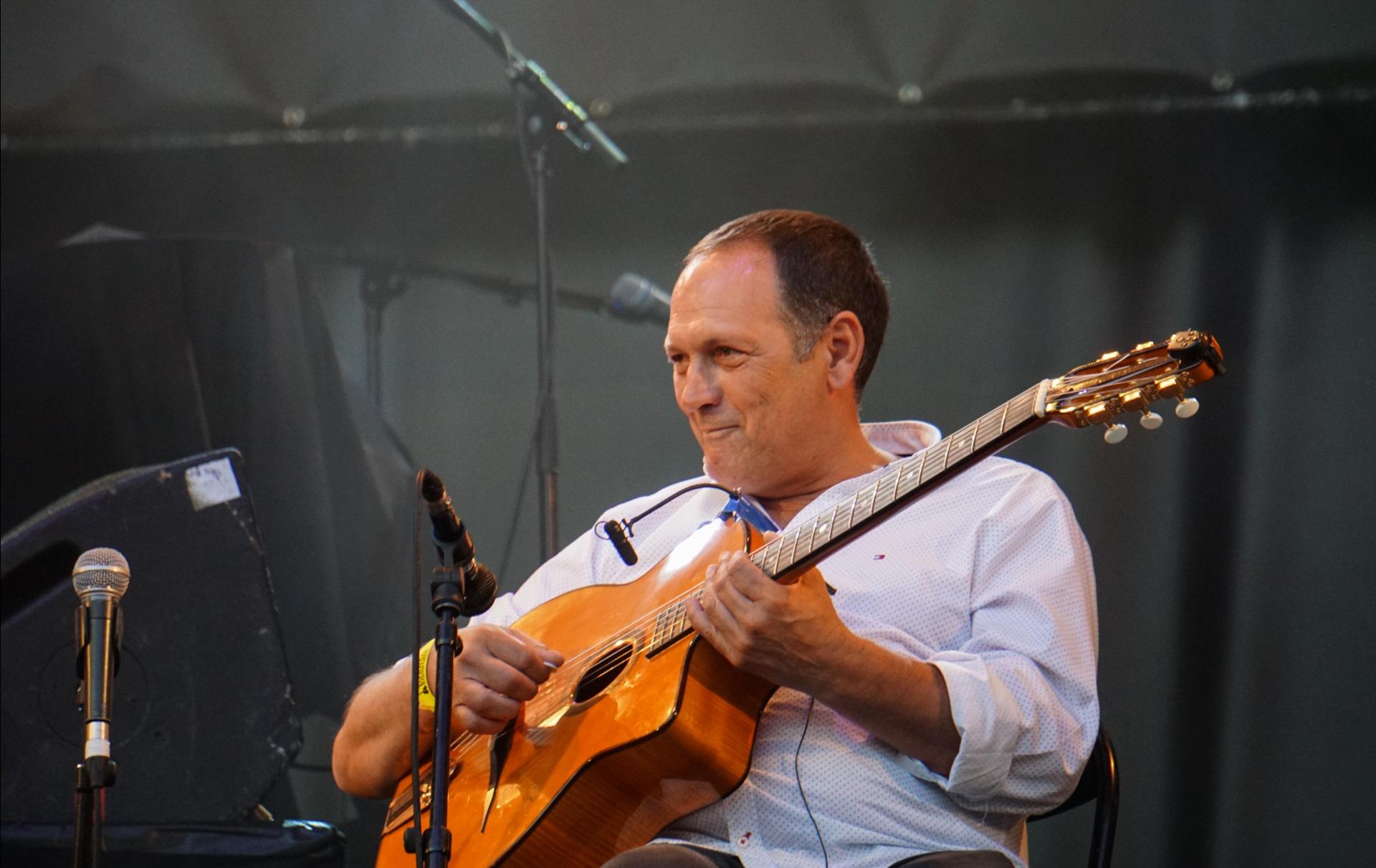 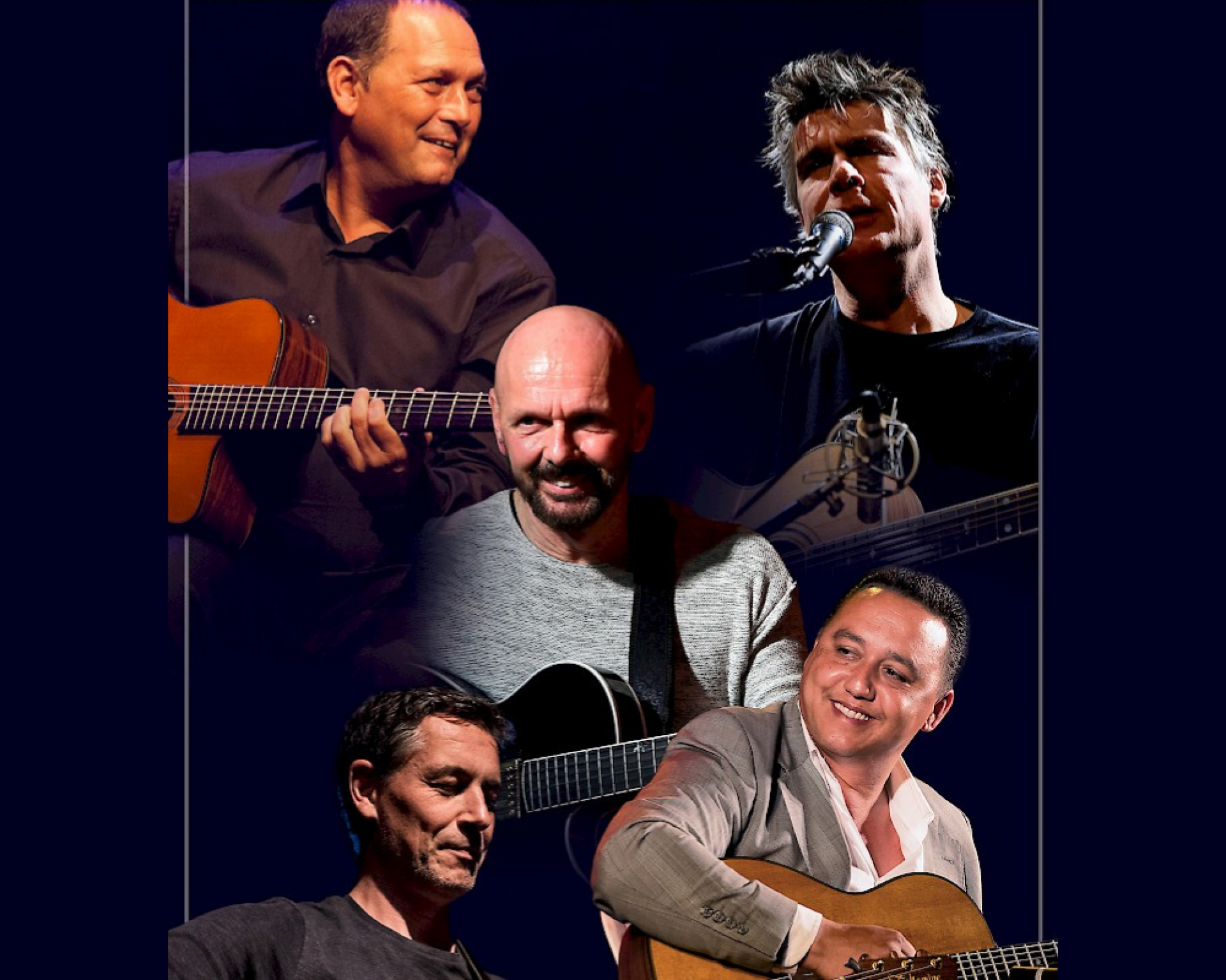 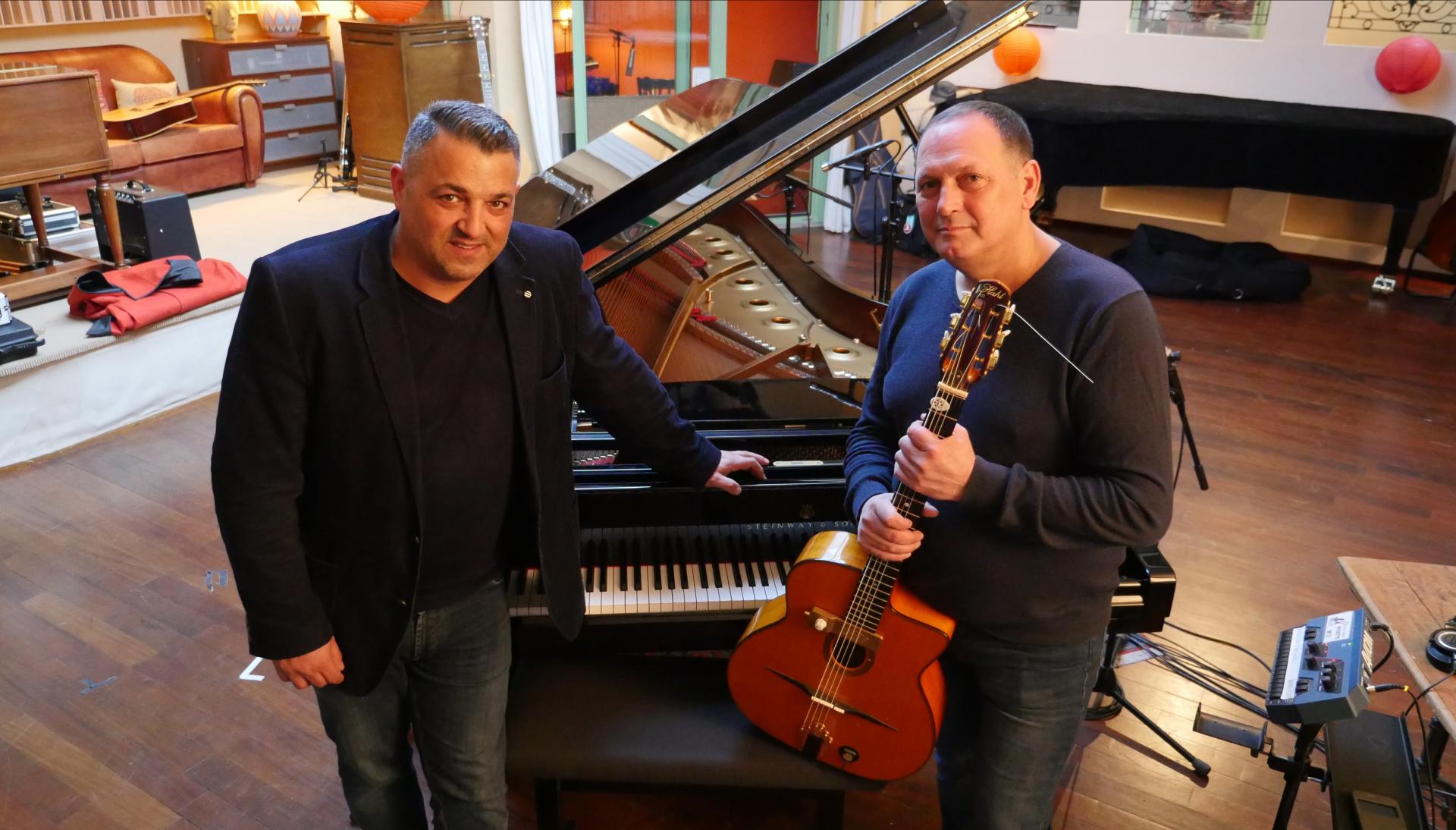 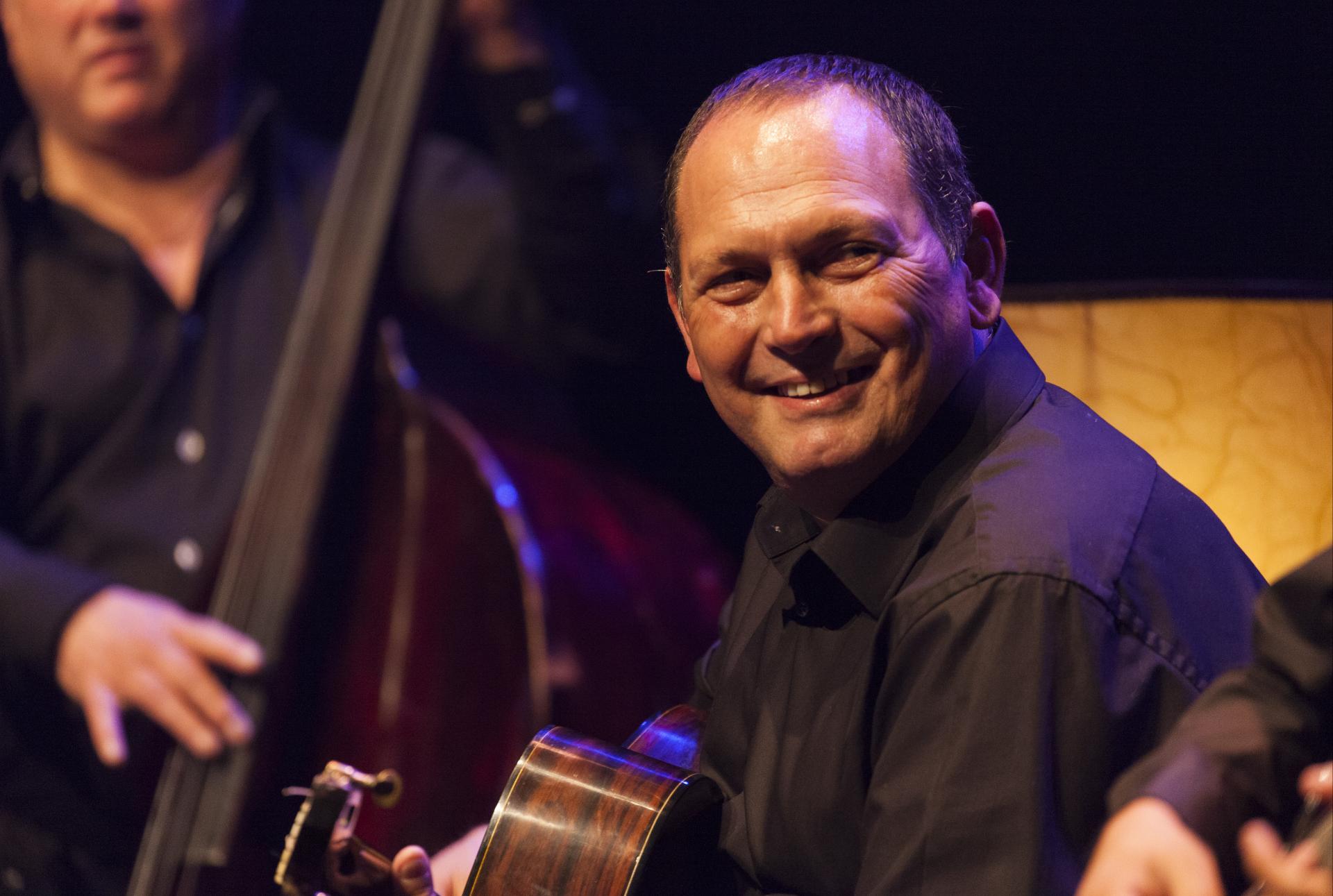 Dutch guitarist Stochelo Rosenberg is not only one of the best representatives of gypsy jazz, but also an undisputed icon.
he started an international career after his first album "Seresta" (1989).
His brilliant and striking virtuosity, as well as his extremely melodious playing make the eyes of all guitarists in the world sparkle. Stéphane Grappelli, grand master of the violin and partner of Django Reinhardt for many years, hired Stochelo in 1993 for a concert at Carnegie Hall, then for tours around the world.

Stochelo Rosenberg was also hired to record the soundtrack for the award-winning film "Django", which hit theaters in 2017. He did so with rare authenticity.

Stochelo Rosenberg (guitar)
William Brunard (Double bass)
Rocky Gresset (Guitar)
Stochelo Rosenberg is considered one of today's finest guitarists. His outstanding technique, his great elegance and his very personal vibrato, combining virtuosity and emotion, have led him over the last twenty-five years to share the world's greatest jazz stages with several generations of sacred monsters.
Today, he is surrounded by two of the best jazzmen in the world, and is now headlining a large number of events. Inspired by Django Reinhardt, they expand their work with classical, pop and bossa nova in the gypsy swing style. His trio has a loyal following of fans from all over the world and fascinates artists and music lovers from many different musical backgrounds!

Stochelo Rosenberg (guitare) – André Ceccarelli (Batterie)
Jermaine Landsberger (Piano) – Darryl Hall  (Contrebasse)
He is now opening a new chapter in his career by creating "Gypsy Today", after a long cooperation with the exceptional jazz pianist Jermaine Landsberger. In Germany, their concerts were a great success.
Pianist Jermaine Landsberger gave his imprint to the genre, at the forefront of the European gypsy scene. His music draws on Django Reinhardt's legacy, from traditional American jazz to the present day. His powerful and melodious playing made him a sought-after partner by international musicians, such as Randy Brecker, Bob Mintzer, Larry Coryelle, Pat Martino and Bireli Lagrene. The rhythm of the quartet is the top of the French jazz scene, the rhythmic conduct is given by drums star André Ceccarelli from Paris. Equally prestigious, the American bassist Darryl Hall from Lyon, a great figure on the international scene, lays the foundations of the group.
Stochelo Rosenberg and Jermaine Landsberger present their new CD "Gypsy Today" where we can also hear the famous violinist Didier Lockwood, unfortunately deceased too early.
The compositions of Rosenberg and Landsberger, as well as the melodies of Django Reinhardt are presented in a modern and contemporary context.
The Five Great Guitars - The music of SANTANA
Black Magic Woman, Samba Pati, Jingo Loba, Europe, Oye Como Va, Moonflower, Soul Sacrifice, Well All Right, She's not there, Smooth and Maria Maria...
Who doesn't know them? These hits and many others by Carlos Santana and his group are interpreted with virtuosity, this unforgettable concert is a real fireworks display on strings.
The founder of The Five Great Guitars, Jan Kuiper, together with his guitarist friends Digmon Roovers, Stochelo Rosenberg, Paulus Schäfer and Marcel de Groot, play acoustic and bluesy arrangements of the most beautiful songs of this legendary guitar hero!

Last Album : "Gypsy Today"
Out on September 18th 2020
00:00
Update Required To play the media you will need to either update your browser to a recent version or update your Flash plugin.